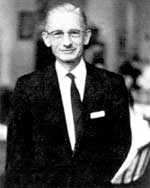 Thomas Paul Fleming was an influential teacher in medical librarianship, head of the Medical and Natural Sciences Libraries of Columbia University Library and involved in collecting and retrieving journals from Europe during World War II. He was a member of the Army Medical Library Survey Committee and made contributions to the History of Science. He was elected a Medical Library Association Fellow.

Tom received a Bachelor's Degree in 1930 from Western Reserve because “hell, I'd go to a school to learn to curl hair if somebody gave me a scholarship,” and then worked as the general assistant in charge of departmental libraries while he earned a Masters of Science in Biology. In 1936 he went to the Library at the College of Physicians and Surgeons at Columbia and 1948 he became the Head of the Medical and Natural Sciences Division. The medical library was under his supervision as well as Biology, Math, Chemistry, and all the branch libraries. “It has always been my personal philosophy that a subject library is part of a whole, that a medical library cannot be all things to all people...[that] library service was part of a team.”

He particularly enjoyed teaching in the Library School at Columbia and in 1948 became a Professor in the school. Several librarians who were interviewed by the Oral History Committee describe his teaching as dynamic and gifted. He insisted that practicing librarians made better teachers: “It had always been my thought that too many of the full-time teachers [in library science] became sterile in their attitude toward librarianship.”

Tom was active in the American Library Association, American Council of Research Libraries, and in the Medical Library Association, which he joined in the 1930's when “being smaller, everyone knew everyone else [and] relationships between librarians and their constituency seemed to be on an extremely friendly basis.” During and after World War II, Tom worked with the Joint Committee on Importation as a representative of various library associations to arrange for distribution of European books and journals that were held up because of the war. In early 1943 he served on the Army Medical Library Survey Committee, working especially on the status of resources and the recommendations for improvements in the collection. During his tenure at Columbia, Tom pursued many other activities, such as lecturing to residents and other medical staff groups, serving on the National Research Council subcommittee on orthopedic literature, compiling thesauri in the fields of fertility, thanatology, Parkinson's, and working with the University Seminars on the Renaissance and on Death. He notes that “engaging in these activities...strengthened my ability to...administer the Medical Library as well as all the other libraries in the Medical Sciences Division.”

He sums up his style by saying, ”I did not expect to run a library that was quiet.”