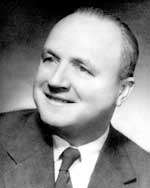 Wesley Draper came to the Medical Society of the County of Kings Library in 1929 as a library assistant and advanced to the position of librarian in 1947. He would be the last person in that position as the library was transferred to Downstate Medical Center by 1963. Wesley's contributions to the Medical Library Association ranged from committee member (Exchange, Finance, Gifts and Grants) to the Council on National Library Associations representative to President in 1955-56.

Wesley was one of a class of thirty at Taylor University. He studied music, languages, English, and psychology and worked in the college library for two years. His library education consisted of a course of summer study at the University of Iowa, on-the-job training with Dr. Frankenburger, his predecessor at the Medical Society, and courses at Columbia and Rutgers.

The Medical Society of the County of Kings Library was built in 1900 and opened two years later. In the early years, the library actively acquired books but did not bother to catalog them. When Wesley arrived in 1929, Dr. Frankenburger told him to tackle the basement. "...when I came down to the stairs, books were piled up as far as you could get, right to the ceiling. There were props on this side to keep them falling over the steps... After I got to the bottom of the stairs, there was an aisle like this that went to the boiler room...there was just stuff everywhere...That was where the elevator was and it had some books in it...I started at the front and worked down...In the process, I found three incunabula nobody knew we had and one of them was worth at least $500 or $600."

The library was open to the public and Wesley believed this was to protect its tax-exempt status. He recounted a story about providing information to a layman. "Somebody came in there one time and wanted something about cancer. He found out for the first time that it was incurable. He left the front of the building to go out and commit suicide. He was going to jump in front of the trains that came out from under the tracks. We had a Dr. Thompson on the first floor at the time who was working on the milk commission. He saw the man and recognized by the expression on his face what the trouble was and he talked him out of that."

Wesley defended the transfer of the library to Downstate as the only solution which guaranteed continued access to the collection for area physicians. The alternative would have been to sell it all off. As it was, the rare books were sold because the environmental conditions at Downstate were not suitable to house them. The sale netted over $500,000. The rest was integrated with the Downstate collection but technically still belonged to the Medical Society, which continued to support and develop the collection under this new cooperative arrangement.