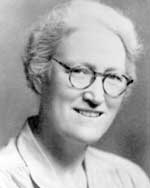 Janet Doe's memory is preserved by the Medical Library Association in its annual lecture series founded in 1965 in her name. She was long associated with the New York Academy of Medicine and had links with the Army Medical Library as a consultant and champion. She served as Secretary for the Medical Library Association from 1936-40 and as President from 1948-49. Janet spoke and wrote extensively, earning scholarly recognition for her Bibliography of the Works of Ambroise Paré. For her many professional achievements, including editorship of the first edition of the Handbook of Medical Library Practice, Janet was awarded the association's Noyes Award in 1954.

In an interview that was all too brief, Janet traced the path she took to medical librarianship. Following her graduation from Wellesley College with a degree in science, she responded to a survey recruiting college graduates for nursing training camps during the latter part of World War I. A few months of camp training was followed by hospital training, in her case at Presbyterian Hospital in New York City. "My introduction to hospital work itself...was like plunging into cold water. It was during the severe epidemic of flu and patients were crowding the hospital. They lined the corridors. Cots were put in every available spot. It was commonplace to have several people die every night." When a knee injury forced her to give up this endeavor after a few months, she remained in New York City to assist an uncle stricken by stroke. It is at this juncture that she volunteered at the New York Public Library and then went on to the New York Public Library School (which would become part of Columbia University Library School).

Although she expected to be a generalist, Janet was recruited for Rockefeller Institute for Medical Research in 1923. Three years later she moved to the New York Academy of Medicine as head of the periodicals section and three years after that she became the assistant librarian. In 1949, she became the first female head of the library, although she was quick to point out that most administrative positions at that time were occupied by women, the Academy being one of the few exceptions. She attributed the later influx of men into the profession to the prestige that the Medical Library Association engendered for the profession through its work on education, standards, certification, and salaries.

In reflecting on the Medical Library Association, Janet recalled, "In those days, very few individuals became members of the Association. Their library was a member and they attended meetings as members of their library's staff. But very few individuals were active members, until some years after the beginning. I can't remember when I joined, but my first meeting, I think was 1928, when they met at the Academy Library...It was my first observation of MLA at close hand." Other matters with the respect to the association she mentioned were the close affiliations with the Association of the History of Medicine and the Special Libraries Association, the fledgling status of hospital libraries, and generational differences on the issue of certification. She pointed to the publications of the association as a measure of its development. "Their publications, I think, reflect the coming of age of the young, small, struggling organization, manned by perhaps self-taught people or with less education than they would have liked; and an organization which grew into a really professional one with personnel with enormously different backgrounds and abilities and experience."

The interview closes with Janet's thoughts about her work on Paré. "...the writing of Paré was the most fun, I think, I ever had. It gave me acquaintance with a great figure of medical history, who became a personal friend over the years. It also gave me a knowledge of bibliographical work, which I learned out of McKerrow's Textbook of Bibliography, (This book by Ronald Brunlees McKerrow is called An Introduction to Bibliography for Literary Students), having known nothing about it before. I followed one of the greats, Kane's Bibliography of William Harvey (This book by Geoffrey Keynes is called A Bibliography of the Writings of Dr. William Harvey). If anybody working in a medical library happens on some point of interest, I would advise them to follow it up somehow, somewhere, and try and get firsthand acquaintance with some point, some personality in their field."