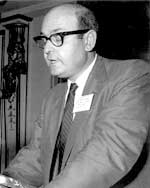 Martin Cummings was director of the National Library of Medicine for 20 years, from 1964 to 1984, a length of service only exceeded by John Shaw Billings. His tenure saw the passage of the Medical Library Assistance Act, implementation of MEDLARS I and II, and the creation of the Lister Hill Center. He has received many honorary degrees and awards, including the Medical Library Association Marcia C. Noyes award in 1973. Marty believes strongly that “no society can grow without having easy, if not free, access to information .. in the field of health and medicine particularly.”

Marty received his medical degree from Duke University in 1944, where he learned “not only pediatrics but the value of libraries in medicine.” In 1946 he was commissioned in the Public Health Service and except for a brief period as an academic at the University of Oklahoma, “spent [his] entire career working for one part of the government or other.” He highlights as especially satisfying his Public Health Service work with tuberculosis and sarcoidosis patients.

Under Marty, the National Library of Medicine cultivated relationships with the medical, dental, and nursing communities and with the American Association of Medical Colleges. It was at the National Library of Medicine's request that the AAMC sponsored and published guidelines for medical libraries, the Stead report on the development of the Lister Hill Center, and the Matheson-Cooper report on the role of the library as an integrating force. He also comments on the importance of the Williams and Wilkins copyright suit in the 1970's as being that “it showed the private sector that libraries no longer could be expected to lay down and roll over anytime publishers threatened....” He expresses fears for privatization of libraries that will strip away all but the profit making aspects of the library mission.

Like many other library leaders, Marty was quick to recognize the importance of artificial intelligence and medical informatics to libraries and in the 1970's he offered the National Library of Medicine funds to promote their development when other agencies at the National Institutes of Health were unwilling to do so. Nevertheless, he warns “I would not want [informatics] growth and development to take place at the expense of other kinds of library services.”

On his retirement from the National Library of Medicine, Marty decided to stay in the library world working with grant applications, preservation issues, and the library economics at the Council on Library Resources. He advises librarians to “pursue change...involve the constituency you serve... [and] to translate accomplishments to the public.” He feels that libraries in the future may not grow larger, but “will remain the unifying force, if not the focal point, for at least intellectual information activity both on campus and off campus.”