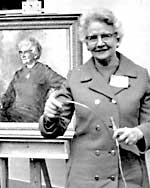 Helen Crawford made her mark in health sciences librarianship by literally building the medical school library at University of Wisconsin at Madison and through numerous publications and service to the Medical Library Association. Her professional accomplishments earned her the Presidential Citation of the State Medical Society of Wisconsin.

Helen was born in North Dakota to parents who were teachers and fully expected her to go to college however uncommon it was at the time. She fulfilled that expectation by earning a Bachelor of Arts in German at the University of North Dakota in 1928. After working at the North Dakota Historical Society for a year, Helen went to Simmons College to earn a B.S. in library science and to get "a little Eastern polish." She returned to the Midwest in 1931 as a classifier for the Iowa State University and was active in the American Library Association. In 1944, Helen decided to purse a master's degree in library science at the University of Chicago. The next year, before she completed her thesis, she was recruited for the director's position for the medical library at the University of Wisconsin at Madison.

Helen's biggest professional challenge at Wisconsin was coping with lack of space. After several plans for expansion failed, "...the alumni organized to build a building because Dr. Middleton wanted it. One of them said they thought he had holes in his head, but if he wanted a library, they'd get him a library. So they collected $250,000, which doesn't seem much by today's standards, but the legislature then gave $100,000." Just as the building plans were being realized in 1961, Helen underwent surgery for colon cancer and endured three-and-a-half years of experimental chemotherapy. From this personal experience, she was acutely aware of the delays in the dissemination of medical advances. "And I know for several years when I went to meetings, I'd have to have treatment at various centers, and the only doctor who knew anything about this cancer chemotherapy was out at Estes Park...it shows how slow these things are sometimes, in getting into general currency."

Related to the lack of space was lack of staff. Initially, Helen had a staff of three full-timers plus student assistants. Even with this configuration, the library continued its support for a long-standing extension service to the physicians in the entire state. This was a loan service from an unbound duplicate collection until the introduction of Xerox machines. Her passion for outreach to remote users would not be shared by most in the profession until the 1960's. Another of her passions was rare books and she was very much involved in the development of the history of medicine collection at Wisconsin.

Helen's involvement with the Medical Library Association, first as an institutional member, began with an annual meeting in New Haven in 1946. Within three years Helen was delivering papers and serving on committees. She recalled lively discussion and a close vote on certification, the evolution of the central office and regional groups and sections, the maturing of the organizational structure, and poor attendance at the business meetings. What she most valued about her affiliation with the Medical Library Association was "the public meetings and the writing. That's the ability to talk to the whole membership and to talk frankly about our problems and to try to persuade people that we were not being secretive about them--that we were members together of an organization that utilized whatever skills we could offer." In 1972, Helen assumed the role of president, by which time she was retired from Wisconsin. But she wondered about the timing of such a duty in relation to one's career. "It's almost a full-time job...there is also the question of energy, and I'm not entirely sure that people near the end of their professional careers are the best ones...They have a certain amount of wisdom, but they lack a certain amount of drive." On the other hand, she was quite certain about the role of history when quoting Guy Stanton Ford: "I do not think that any man fully grasps all that his profession means, the sense of all that is behind him and the importance of what he is and what he does unless he knows the long road traveled by all those on whose shoulders he stands today."