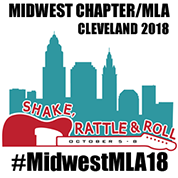 The Midwest Chapter of MLA held its annual meeting in Cleveland, OH, on October 5–8, 2018, at the Westin Cleveland Downtown. The meeting was cosponsored with the Ohio Health Sciences Library Association (OHSLA), and many of the more than thirty volunteers who made this event a success were OHSLA members. The theme was “Shake, Rattle, and Roll,” after the 1950s song, and was meant to strike a chord with the fact that Cleveland is the birthplace of rock music and home to the Rock & Roll Hall of Fame. Planners hoped to provide a fun and entertaining event with innovative programming that would reflect the theme.

In the past, conferences have typically opened with a Saturday evening event, but the Cleveland conference broke with tradition and opened on Friday night with a “Night at the Museum.” The Cleveland Medical Library Association hosted the event at the Dittrick Museum of Medical History, which is housed at the Allen Library at Case Western Reserve University. Old medical photos, antique medical equipment, and a wonderful Greek buffet did not disappoint those who attended the event.

On Saturday, six continuing education classes were attended by eighty-four individuals. The Greater Midwest Region (GMR), National Network of Libraries of Medicine (NNLM), presented two new classes on “Open Science for Health Science Librarians” and “Precision Medicine.” Morning and afternoon tours of the Rock & Roll Hall Fame were hosted by the Hospitality Committee. The well-known local band InCahootz provided the Saturday night entertainment, and we danced the night away. The band is led by Cathy A. Murch, AHIP, Library, Lake Health, Concord Township, OH, who is a hospital librarian by day and a lead singer by night.

Work-life balance was the subject of Sunday’s keynote speaker, Catherine Hakala-Ausperk, an Ohio public librarian with over thirty years’ experience. Beverly Murphy, AHIP, FMLA, MLA president, gave the MLA update. One of the innovations she reported on was the public librarians symposium held at MLA ’18. Another update included a discussion of the Research Training Institute for Health Sciences Librarians. Dominic King presented on how he incorporates technology into his medical practice in a panel session called “Gadget Garage.” He grabbed the audience’s attention with his augmented reality Virtual Tee-shirt, which a brave volunteer wore. The shirt enabled the audience to see the volunteer’s heart, lungs, and other vital organs! Archivist Jennie Thomas and librarian Laura Maidens presented what a “Day in the Life” of a Rock & Roll Hall of Fame librarian entails.

A popular lunch-time feature on Sunday was the “Jam Sessions,” which provided opportunities to meet and have a discussion group centered on specific topics, including systematic reviews or instructional assessment. The contributed paper sessions were spread out over two sittings, and attendees gave high marks to this portion of the conference. Sunday evening activities moved to a local Mexican restaurant on the shore of Lake Erie. A festive atmosphere included a build-your-own-taco bar, dessert table, and salsa dance lessons. Creative party planners also incorporated a photo booth at the restaurant, where librarians let loose and the laughter was infectious.

On Monday morning, OHSLA held its business meeting, and the meeting was followed by the GMR update. The second keynote speaker was Patricia Brennan, director of the National Library of Medicine (NLM), who spoke on “The Role of Librarians, Libraries and the NLM in Achieving the Promise of Precision Health.” She followed her keynote presentation with the NLM update. The popular afternoon poster session had sixteen contributions, with topics varying from artificial intelligence to creation of a branch hospital library system. The conference concluded with a panel on the “Harmony of the Medical Humanities” and featured perspectives from a physician, a medical anthropologist, and a librarian on the interdisciplinary nature of the humanities’ role in medicine.

Overall feedback from the 121 attendees and 36 vendor representatives was very favorable, and the conference hosts were happy to show their Midwest colleagues how Cleveland can “Shake, Rattle, and Roll!”

Renae Barger and Rebekah Miller, cochairs, MAC/MLA Annual Meeting Committee, present information for exhibitors at the virtual annual meeting of the Mid-Atlantic Chapter of MLA (MAC).
Chapter News: Save the Dates for the NAHSL Annual Conference! 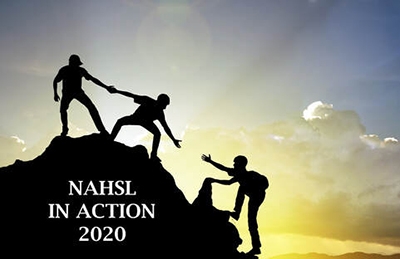 With the emergence of COVID-19, many conferences have been cancelled or postponed. Some organizations are investigating a virtual alternative. MCMLA conducted virtual annual meetings in the past and w...