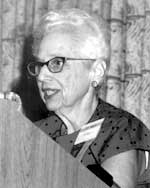 Estelle Brodman has had a major impact on medical librarianship as a scholar, teacher and researcher. She was at Columbia University, the National Library of Medicine, and later Director of the Washington University Medical School Library in St. Louis. She served on the Medical Library Association Board, was President from 1964-1965, editor of the Bulletin of the Medical Library Association for ten years, received the Gottlieb Award in 1977, delivered the Janet Doe Lecture in 1971 and was given the Marcia C. Noyes award in 1974. She received many other honors including the Special Library Association John Cotton Dana Award in 1981. Estelle says that "I come from a culture [in which] the greatest pleasure in life is the study of intellectual questions...I don't understand people who don't enjoy learning."

Estelle was not accepted into medical school, so she went to library school at Columbia, receiving her Masters in 1943. She says that library "education was narrower but deeper than today's...their standards were higher ...[and students] were much better." She was a medical librarian at Columbia University from 1937-1949. While serving as the Acting Librarian at Columbia's Medical School Library, she was told that they "would never make a woman [head] librarian....so I went and got my Ph.D. [in the history of medicine]." She continued to teach at Columbia while working on her doctorate and says that "the most interesting class I ever taught [included] Brad Rogers, Louise Darling, Jacqueline Felter and Erich Meyerhoff !" She finished her dissertation, The Development of Medical Bibliography, in 1954, and it was published by the Medical Library Association.

Brad Rogers asked her to come to the Army Medical Library as Chief of the Reference Division in 1949. The "library had fallen into a period of lethargy and great disorder...there was no classification scheme and therefore it was almost impossible to find anything," and a lot of material was out of scope. During the 1950's and 1960's there were "people with vision and drive and executive ability...[who] put in to effect so many changes that .. I could hardly believe it was the same place..." In 1960 Estelle became an Associate in Extramural Planning and worked with Scott Adams to develop and write much of the Medical Library Assistance Act.

In 1961 she decided she "would be happiest [at Washington University in St. Louis] because the dean understood what a library was trying to do...I wanted to teach...[and] I was able to persuade them that just as any other department [the library] should do research and training...[and they gave me] money to do research and development and a separate staff and some space...." Washington University had an excellent historical collection but had needed organization, new materials and staff: "the things that needed to be done were so obvious ...that we made a great deal of difference in a small time." Estelle was able to develop the PHILSOM automation project, partly because in the 1960's, "I think it was just in the air... at that period everybody was euphoric [about automation]." She also started a specialized internship in computer aspects of librarianship that "brought the idea of automation to a larger group...as [the interns] went out from here."

Estelle was active in the Medical Library Association, but also was Director of the Special Library Association from 1949-1952, a member and chair of the National Institutes of Health Biomedical Communication Study Section, a member of the History of Medicine Review Panel, the Council of the American Association for the History of Medicine, and the Presidential Commission on Libraries. Her first Medical Library Association Meeting was in Boston in 1938 when "it was a more interesting group of people...intellectual, scholarly and individual people...." She served on many committees because "in those days you were on every [committee] if you lived long enough." As editor of the Bulletin of the Medical Library Association from 1947 to 1957, she improved the editing and printing quality and standardized the format. The most difficult part "was getting people to get their manuscripts in on time." She particularly enjoyed her work with the joint Medical Library Association/ American Association of Medical Colleges Committee to creating guidelines for medical school libraries and found that "the best [chief librarians] ran the best libraries." She feels that standards are important, "but they get out of date [and]....in a world of uncertainty... you need flexibility that standards may not give you."

Estelle has done extensive consulting abroad and in the United States. Her favorite consulting position may have been in Japan in the 1960's when she taught at Keio University and conducted a survey of medical school libraries for the Rockefeller Foundation. Although she wonders if her consulting really accomplished much, she says it did "enlarge my understanding of the world."

In 1981 Estelle already foresaw that "every laboratory [will have] its own computer [and] make it unnecessary...to come to the library...." She says she "would like to see [libraries] better able to understand the problems of the people who [use them]." Finally, she comments that "medical librarianship [is] very exciting...its a field that can be intellectually stimulating and intellectually broadening."