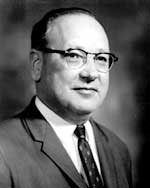 Al Brandon is best known for his acquisitions lists for the small medical library, nursing, and allied health. "It was a result of my work with the hospital librarians in Baltimore that I decided it was about time to have a reference tool of this type. The American Medical Association had for many years published something of this nature, their last edition having appeared in 1959. Therefore, I felt in 1965 it was time to do something and that is how and why I created the lists." In recognition for this work, he was awarded the Ida and George Eliot Prize in 1972. What is less well known is that Al assisted with the indexing of the forty earliest volumes of the Bulletin of the Medical Library Association and developed the first subject list of journals indexed in Index Medicus that became the forerunner to the National Library of Medicine's annual list.

Al started his career in librarianship as a student assistant in the library of Atlantic Union College where he earned a bachelor's degree in theology. In 1957, he was the eighth member of the faculty hired for the new University of Kentucky Medical School. "...I became extremely interested in the challenge of creating a Medical Center library from nothing, including the collection, planning the building quarters, and developing services." Al later headed Welch Medical Library of Johns Hopkins University and the New York Academy of Medicine before pursuing private practice in 1979 as a library consultant. In addition to his administrative and consultative responsibilities, he was involved with library education as a lecturer at Syracuse University and the University of Maryland and through his work on the post-graduate training program of the National Library of Medicine while at Johns Hopkins University.

Al joined the Medical Library Association in 1953 at a time when there were 1100 members. He held numerous committee appointments and served as President in 1965-66 and editor of the Bulletin of the Medical Library Association from 1961-69. In his inaugural speech as Vice-President he championed the cause of hospital librarians. "I made a plea in my address, which was called The Clap of Hands, for much more emphasis to be placed on the small medical library and personnel within hospital medical libraries. The greatest majority of our membership was made up of these people, and very little, seemingly, had been done for them." As Janet Doe Lecturer in 1969, he discussed faculty status for academic medical librarians. In appreciation for accomplishments throughout his career, he was awarded the Marcia C. Noyes Award in 1977.

Al speaks proudly of his editorials in the Bulletin of the Medical Library Association. "One was in the October 1962 issue called 'On Being an Active Member' and it was an attempt to interest members by using Shakespeare's Hamlet, Act III, Scene 1, Line 56 and paraphrasing that. The second one...was originally published in October 1963 and it was called 'A Man Without Keys.' It so happened that I was just in the midst of moving from one medical library to another, and I thought of how much devotion I had given the libraries to which I was dedicated, to perhaps some diminution of family relationships and that's why I wrote that article....One other editorial that I would like to mention, that I wrote for the [Bulletin of the Medical Library Association] way back in 1963, it was in the January 1963 issue, was called 'Publish or Perish' and it was a plea for medical librarians to do more research and writing..."

Consistent with his work on the Brandon-Hill lists, Al voiced reservations about the paperless society. "I certainly feel that the book has been overlooked a great deal in recent years as a source of basic firsthand information...The microcomputer has definite place in the medical library, even the hospital library, and certainly belongs there. But we don't want to overlook what is at our fingertips in the physical book in the physical term."