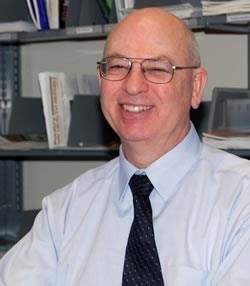 After majoring in wildlife biology, Trenton Boyd received his M.A. in library science from the University of Missouri at Columbia in 1968. His first professional position was as a science reference librarian at Wichita State University in Kansas.  In 1970, he became the first professional veterinary librarian at the University of Missouri where he is also an Adjunct Assistant Professor, Department of Biomedical Sciences. During his 42-year tenure at the Zalk Veterinary Medical Library, Trenton has overseen the construction of a new library and many changes in both educational and library philosophy and service.

Trenton has a long record of professional association activities, on the regional, national and international levels, in both library and veterinary organizations and is a founding member of five associations. A long-time member of the Medical Library Association (MLA), he has not missed an annual meeting since 1972.  He is a Charter Member of the Veterinary Medical Libraries Group/Section of the Medical Library Association (VMLG/VMLS) and was elected the group’s second Chair to serve in 1974/75. He served as chair again in 1999, and as the VMLS Section Council Representative, 1985-1988.  He has made a major contribution through his work on the Veterinary Serials Committee and its predecessor, the Ad Hoc Committee to Create a Basic List of Serials. Trenton has chaired this Committee continuously since 1978 and has spearheaded the publication of three editions of the “Basic List of Veterinary Medical Serials,” for which he won the 2010 Daniel T. Richards award for collection development. He also worked with the Serials Committee to have more veterinary journals indexed in MEDLINE.

Trenton has long been interested in history, and is a member of the MLA History of the Health Sciences Section, the American Veterinary Medical History Society and the World Association for the History of Veterinary Medicine.  He has written and given talks on various aspects of veterinary history and won the 2009 Murray Gottleib Prize for history of medicine with his essay on the lost literature of veterinary medicine.

In addition to his Serials Happenings columns in the VMLS Highlights and News Notes, Trenton edits the “Veterinary Science” sections of Magazines for Libraries. He co-edited the Veterinary Medicine, Animal Nutrition Sciences and Parasitology sections in Medical Library Association’s Master Guide to Authoritative Information Resources in the Health Sciences, (2011).  He has a major collection of veterinary postcards some of which appear in Beauty and the Beast. Human-Animal Relations as Revealed in Real Photo Postcards, 1905–1935 (2010), and in his “Veterinary Medicine as Portrayed on Postcards” issue of Historia Medicinae Veterinari (2011).

In 1978 Trenton was elected to Phi Zeta – a honorary student veterinary medicine society, one of only three librarians ever so honored. At the University of Missouri, he was given the School of Veterinary Medicine Dean’s Office Distinguished Service Award.  He received the 2010 Louise Darling Medal for distinguished achievement in collection development; he is a Distinguished Member of the Academy of Health Information Professionals; and he was elected a Fellow of the Medical Library Association in 2011.