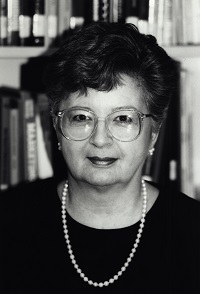 As director of Treadwell Library of the renowned Massachusetts General Hospital for over twenty-five years, Jacqueline D. Bastille, AHIP, FMLA, transformed it into a model for health sciences libraries. She was a leader in automating library services and space planning, and, as president of the Medical Library Association, she encouraged librarians to strengthen their professional role.

Bastille earned her bachelor’s degree in French at the University of New Hampshire in 1952. Employment at New England Telephone provided both income and an understanding of working with the public.

I handled accounts and got people to agree to pay their bills and helped to have …service installed…so it was working with the public, and they trained us for seven weeks… [W]ho knows how to handle the public when they come out of library school, I ask you.

Deciding upon librarianship, she chose the University of Michigan, receiving her master’s degree in library science in 1957. “I looked at the library schools that gave the PhD. I thought that if I did that I would be surer to get a good school.”

Bastille began her library career at the Free Library of Philadelphia under the leadership of important twentieth-century library figure Emerson Greenaway and was promoted to head a branch library (“we were called ‘roving assistants.’ I worked in three of the large departments in the main library and then worked in a branch”) before accepting an offer from Smith, Kline & French Laboratories (1960-1970). There she assumed responsibility for documents as well as the library, met pharmaceutical librarians and Eugene Garfield, and took courses from Robert Lentz to become certified by MLA. She was active in MLA’s local chapter (chairing the Philadelphia Regional Group in 1963/64) and in the Special Libraries Association (leading the Pharmaceutical Division in 1968/69). After her library position was eliminated in corporate downsizing, Bastille went to Hartford Hospital in Connecticut (1970-1973), first as medical librarian and later director of libraries. There she got support for and planned a new library facility, beginning her expertise in space planning,

They knew they needed a new library, so I drew up the plan and told my boss that this was what I had decided they really needed… He took it right to the meeting of the board of the hospital, and didn’t they decide they were going to do it, and didn’t the next day somebody come up with the money to build the library. That never happened again to me in my life, but that was really wonderful.

before going to Boston and Massachusetts General Hospital (1973-1999).

Massachusetts General Hospital, with its history as the original and largest teaching hospital affiliated with Harvard Medical School, the oldest and largest hospital in New England, and the largest hospital-based research program in the country, provided Bastille with an important place to demonstrate the value of libraries and entrepreneurship.

There [I] was, sitting in front of the window at my desk looking out at the activity at the hospital. The ER was on one side, and the entrance to the hospital was there, and the ambulances were coming up—and there might be four or five ambulances—and the whole thing was full of life.

She introduced cutting edge automation, including early end-user MEDLINE searching and an integrated library system funded by the National Library of Medicine.

It was very exciting, because we got the grant that gave us about $410,000. At that time, that was really, really incredible. People in the hospital were very impressed. There we were, in like 1988, way ahead of lots of places, with our integrated system.

She designed new library space again, and she made optimal use of it through research on journal usage data to evaluate retention.

Bastille served two terms on MLA’s Board of Directors, in 1985-1988 and later as president in 1992/93. “My experience on the Board of Directors and my experience in three different types of libraries helped me to focus on the…action of vigorously advocating for all MLA members.” Her presidential agenda included the issue of salaries and their effect on professional authority and the role of research in demonstrating the value of librarians. “[Y]ou go around and visit all the chapters, and it’s there that you can influence the members… I tried to influence their interest in the things that I thought were important.” She fostered the identification of strategies for increased emphasis on research within MLA and appointed and served on the task force which published the association’s research policy in 1995.

She also was involved in the area of certification and credentialing, and she taught courses on space planning and management of basic health libraries. She represented the New England region at a seminal 1978 meeting of hospital librarians at NLM that led to the adoption of changes in NLM services and enhanced communication. Bastille was recognized by MLA with the Lois Ann Colaianni Award for Excellence and Achievement in Hospital Librarianship and as a Fellow.

I really think librarianship is a wonderful career choice, and I always believed in it… What is interesting…is that it’s only gotten more sophisticated and more attractive and challenging to work in the field… [L]ibraries are going to keep growing. Technology is what’s doing it. And with the basis…with what we have studied, that fits into information delivery and organizing access to information for people.