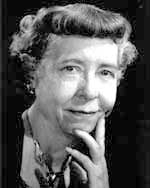 Gertrude Annan, a distinguished rare book authority and winner of the Marcia Noyes Award in 1967, came to librarianship fortuitously and never felt the lack of formal training. She enjoyed a forty-two year career with the New York Academy of Medicine, first as the developer of its rare book room, then as a reluctant administrator, and finally as Janet Doe's successor in 1956. She never lost her passion for the history of medicine and was a most fitting first Janet Doe Lecturer in 1967.

Reflecting on medical librarianship in her era, she commented on its being the heyday of the Society libraries and recalled them as being "community libraries" with broad-based responsibilities. These libraries served practicing physicians without regard for institutional affiliation, extended consumer services to the public, and assisted hospital libraries in various ways. She also recounted the development of the Medical Library Center in 1959 as a cooperative response to the proliferation of literature that followed the war. The Medical Library Center addressed collection development constraints of the participating institutions, alleviated space shortages, and featured an exemplary document delivery system with a union list and daily deliveries.

Gertrude's involvement in the Medical Library Association began with attendance at an annual meeting in 1937. She recalled it being male dominated with a sizable contingent of physicians. History of medicine was a significant topic of discussion within the Association and the meetings often coincided with those of the American Association for the History of Medicine. Her first committee assignment was with the Publications Committee. "And may I say, I can remember sitting with Estelle Brodman while she was still in New York in her home on, was it 39th Street, I think, until midnight, of all things, physically putting together an issue of the [Bulletin of the Medical Library Association], because in order to save money, they had engaged some crummy outfit that didn't know how to arrange the material." The inordinate amount of volunteer time spent by the members eventually led to the establishment of a Central Office for the Medical Library Association in 1961 during Gertrude's tenure as President. In recounting delays in publication which characterized her experience as the editor of the third edition of the Handbook of Medical Library Practice, Gertrude anticipated its transformation to a series. "...I became very much convinced that because of the different nature of the different chapters, it would be far better to bring them out as separate items when they were ready, rather than waiting for a slow author or an author who couldn't get it in on time. By the time the third edition came out, some of the chapters were so far behind that they were already too old, really, to be published."

Gertrude was a proponent of "added-value service" and "knowledge workers" long before the terms were coined. She viewed libraries as cultural resources enhanced by staff with a fascination for the materials and an intimate knowledge of them. With regard to rare book collecting she advised, "I think the most important contribution that could be made in building a collection, is to select some subject that has importance in the area, and the library already has materials...and bring together a library of consequence...There will always be material of interest for a library to acquire. It may not be the earliest or the most valuable or the most important, but there will always be important materials. ...Any institution of prominence or prestige, certainly should have correspondence coming to it from well-known men and women in the field of endeavor of that institution. And a collection of those can be extraordinarily important in archives or in the rare book collection."