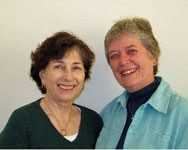 Rachael Anderson and Alison Bunting served on the Medical Library Association Board of Directors, with their terms overlapping for two years, 1983–85. They also worked together in the Association of Academic Health Sciences Libraries (AAHSL) and other activities. This joint interview represents their experiences and the insights gained from their professional service together.

Alison served as MLA treasurer during her board tenure so part of the interview covers the needs for and the challenges of obtaining MLA dues increases. They were on the board in a period when the issue of MLA headquarters staffing and MLA leadership support came to a head and important changes took place as the headquarters role increased and matured. This was also the time when strategic planning had been introduced to the board’s functioning and it was beginning to play a bigger role in board meetings and the association.

Rachael and Alison were involved with the MLA Nominating Committee dubbed the “Nominating Committee from Hell” during the period when the association was having a very difficult time finding candidates for the office of president. The interview goes into detail about the nomination process and its evolution, and supplies anecdotes about how it worked and why it sometimes did not.

Alison and Rachael discuss the role of AAHSL and a document important to and influential for academic health sciences libraries: “Challenge to Action.” They also talk about their service on the National Library of Medicine’s Planning Panel on Education and Training of Health Sciences Librarians and their participation in the UCLA Senior Fellows Program.

Their joint interview gives the reader some good insights into the challenges faced by our professional associations and their members during the time Rachael and Alison played leading roles together.